By Arthur
Last update: June 14, 2021
This post contains affiliate links, and we will be compensated if you buy after clicking on our links.

The rubber part has a significant influence on the overall performance of a table tennis racket.

Just a small change to this surface can result in the ping pong ball malfunctioning.

Hence, users tend to make a replacement after a while of use.

And one of the most common choices on the recent market is the Hurricane 3 rubber. 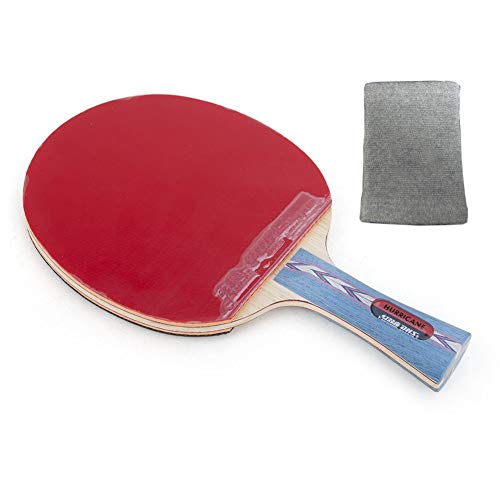 Now, let’s look at our DHS Hurricane 3 rubbers review to see whether it is worth the hype.

DHS Hurricane 3 Rubber Review: How Many Types Are There?

When doing market research – DHS Hurricane 3 rubber, we find more than one type.

However, the proximity of their names confuses many users because they cannot distinguish among those products.

For example, one user had a firsthand experience with the Hurricane 3 when borrowing the table tennis racket from his friend.

He decided to buy this type because it could satisfy his expectation.

However, in stores, the man picked the wrong one due to the confusing names.

To help with your differentiation, we have made the following list.

There are six DHS Hurricane 3 rubber types in total:

Both of them are often available in a small volume due to the use of rare materials.

It also means that these two are quite expensive in comparison with the other.

What Is Special About The Hurricane 3?

The Hurricane III gets its position on the market as one of the most popular choices for most table tennis lovers.

Despite its budget-friendly price range, it comes with unbelievably high performance.

The rubber weighs about 100gr with a hard surface made of durable material.

Its heavyweight can pair well with the light and flexible blades and ensure long-lasting tackiness.

The Hurricane 3 seems to be the best option for those who love to play defensively or “relaxed ping pong” among different styles.

A combination of thick and soft textures helps to lengthen the dwell period.

Plus, it supports in cushioning the ball and neutralizing the spinning force.

Moreover, the tacky feel on this rubber surface plays a crucial role in imparting the table tennis ball spin more readily for each turn.

When it comes to speed, honestly, series III is not the fastest Hurricane table tennis rubber.

It is even slower than the DHS Hurricane 2.

So, Hurricane 3 maybe like a joke if you always expect rubber with crazy fast speed.

It just can offer a decent level of speed as a standard rubber for sure.

We divide a table tennis rubber’s speed rating into two types: including the looping speed and the volley speed.

The former results from heavy topspin shots, while the latter comes with direct and flat contact.

Back to the case of H3, it is superior in creating heavy topspin shots.

These shots appear at an explosive speed commonly used for the looping style.

And the H3 tacky surface strongly helps to produce these shots.

On the other hand, the volley speed is a downside of the Hurricane 3 due to its soft and padded feel.

As we have already mentioned above, Hurricane 3 gives a tacky feel, which can make your spin strategy more effective.

It means that the rubber will offer more spin power in comparison with an average-offensive one regardless of the higher throwing angle.

While in the match, the tacky texture on the surface of H3 slaps against the ball.

This impact adds more directional movements to the stroke to make the spins heavily for several tactics.

Additionally, the softness and flexibility of the DHS Hurricane series 3 keep the ball stay a bit longer on it.

The delay helps to generate spins.

Also, you need to anticipate the ball’s movement after the contact.

Controllability is the highlight of the Hurricane rubber 3.

Among tons of rubbers for table tennis rackets, the product gets the highest rank thanks to its exceptional controllability.

We consider this feature upgraded from the previous Hurricane 2 as an offset for both speed and spin.

So, how does the H3 get controllable?

The rubber considerably extends the ball’s dwell time on the racket surface because of heavyweight and tackiness.

So, the players have more time to think about the next outcomes based on their strategy.

An outstanding level of control not only cushions the ball but also slows it down for better contact.

While the rubber delays the ball’s landing on the racket, it is time for you to design the next strike.

The more time you have to make a highly right prediction, the better the landing can go on your plan.

On top of that, dwelling time allows you to control various spin styles instead of feeling the ball too erratic.

Despite that fact, you do not need to worry much about the speed.

The H3 still can be relatively fast with its highest level of control for sure.

So, it often works for intermediate users who are trying new tricks.

Besides the controllability, we appreciate the DHS Hurricane 3 hard level, too.

Manufacturers use a superb type of dense sponge material for this rubber.

It ensures an outstanding balance of pliability and tacky texture of the product.

The hard sponge is an additional material layer that impacts speed by preventing energy absorption.

Assuming that the rubber absorbs all energy from the ball contact, it will consequently translate this energy upon the strike to boost the ball’s velocity.

Also, it is slightly beneficial for cushioning the ball impact.

On average, the DHS Hurricane 3 rubber can last around four months, while many other products get their lifespan up to half a year.

Another issue to consider is the susceptibility to humidity and oil.

During the use, these factors can cause the tackiness of the H3 to drop firmly.

Its overall rating will be approximately 4 stars.

So, should it be the best rubber for table tennis rackets? Probably not.

However, if you need a rubber for the learning level, it surely can work.

It is our latest DHS Hurricane 3 rubbers review.

And we are pretty eager to hear about your experience.

If you still consider the rubber, it is worth a try.

In case that you have used it, why don’t we talk about the product together?