By Arthur
Last update: October 20, 2022
This post contains affiliate links, and we will be compensated if you buy after clicking on our links.

Thus, it’s hard to choose the best one between “Stiga Evolution vs Supreme.”

Do not worry, as we’ve got you this post to answer the questions of “What Is The Best Stiga Paddle?” and a full “Stiga Evolution and Stiga Supreme Reviews.”

The differences between Stiga Evolution vs Supreme

First of all, each product has its different advantages and disadvantages.

Voting which item is more optimal depends on various factors, such as the user’s level, performance, the blade, the rubber, the handle.

Following an array of reviews from users, we realize that Stiga Evolution is designed for advanced players who need a bit more precision and enhance their stroke.

Otherwise, the Stiga Supreme should belong to your consideration if you are a learner.

Let’s have a deep look through our below comparison for each unit.

The first section of this “ Stiga paddles comparison” is about their design comparison. 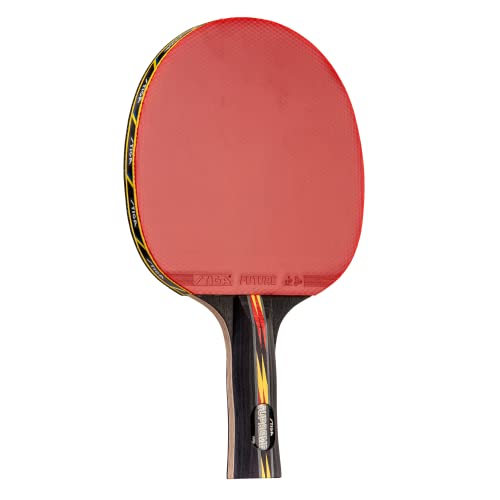 It seems like the Stiga Evolution has a more compact pattern than the Stiga Supreme based on the following two major factors:

Furthermore, the Stiga Evolution weight is 170 (g), and the other is 140 (g), which makes you hardly feel the racket on your hand.

To unravel this feature, we need to consider the three key criteria: Speed, Spin, Control.

Based on table 1, it isn’t difficult to realize that the Stiga Evolution table tennis racket brings greater performance than its opponent.

Players may create more counter-attacks to their rivals and predominate them.

There is a similarity between the two items in terms of blade comparison.

Both of them are equipped with six plies of remarkably light wood and have a sponge with 2mm in size.

However, we still discover some differences between the two of these items regarding the feature.

In detail, this equipment contributes to the Evolution to have excellent speed and good spin, which enhances outstanding control.

In contrast, the Stiga producers apply Tube and Crystal Tech Technology for the Supreme on those extremely light woods.

This decent combination leads to a notably light paddle that supports your hands moving and playing faster and gently.

The Stiga Evolution has a premium ultra-light rubber.

This element makes the paddle own a beautiful pattern and brings lightness to the racket.

Thus, the rubber allows users to experience a higher level of performance with superior spin and control.

With the Supreme version, this item has ACS technology with Future inverted rubber which is excellent in returning and blocking the ball.

The paddle is a good choice for users who tend to have a defensive style.

The tech will hollow out the handle.

This step is operational to absorb vibrations and banish the shockwaves generated by attacking the ball.

Moreover, this hollow handle of the Evolution version can make the racket extremely lightweight, allowing users to have longer playtime without tiredness.

The other product has a combination of WRB system and Anatomic Italian, famous for supporting faster, stronger, and improved touch sensitivity excellently.

After following our comparison between “Stiga Evolution vs Supreme,” have you unraveled which item is the winner?

There is no doubt that if you are a semi-pro and finding a paddle to enhance your stroke technique, the Stiga Evolution will be the first pick.

Additionally, the Stiga Evolution price is affordable, which is one of its best advantages.

The Stiga Supreme is also a good option if you play defensive style and look for a racket with outstanding control.

In our personal opinion, we prefer to pick the Stiga Evolution for the best overall.